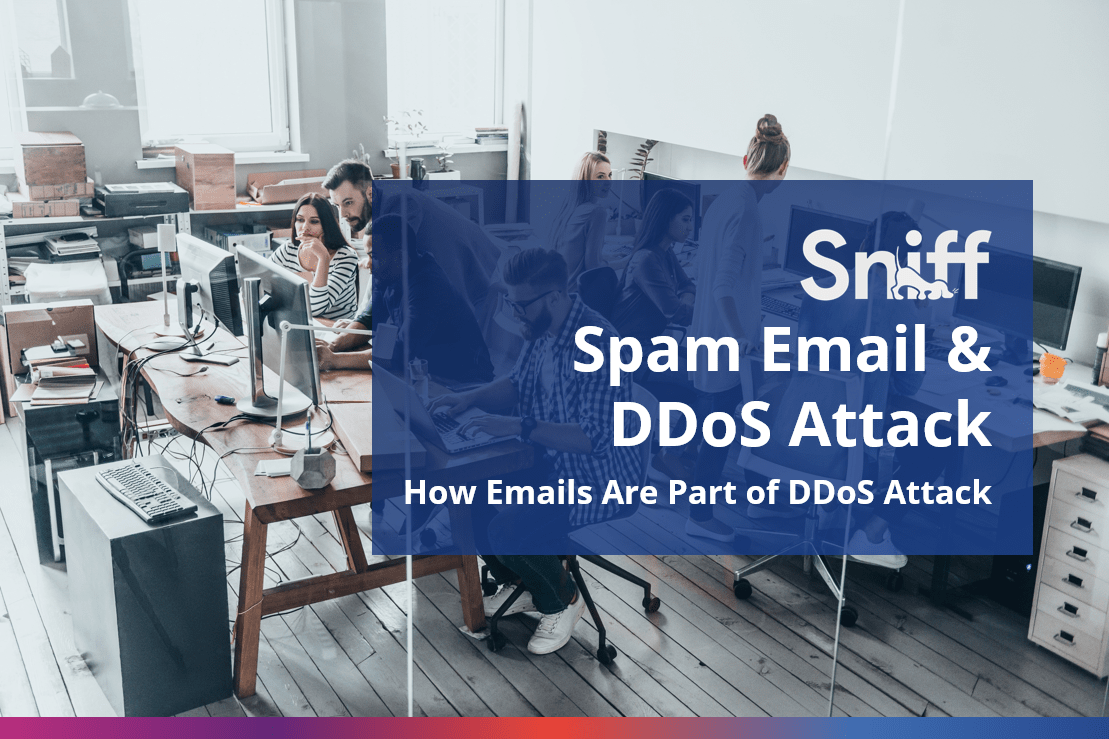 Cyber criminals are constantly developing tools to infiltrate different networks. One of the most alarming and widespread cyber threats that exist right now are DDoS attacks.

But how are spam emails related to DDoS?

The different types of DDoS attacks threaten cybersecurity for organizations and businesses, costing companies up to $2.5M per attack. Let’s discuss this threat in more detail and find out how you can protect yourself from it.

What Is A DDoS Attack?

Simply put, DDoS is a DoS attack where hackers will try and crash a website or app by overwhelming the server with more traffic than it can handle using a network of devices. The traffic consists of incoming messages, requests for connections, or fake packets. The goals of these attacks are primarily financial and political. In financially motivated attacks, the attacker will often threaten the victim with a low-level attack and demand ransom with a threat of a full-blown attack. They can also demand payment by holding websites inaccessible for users.

During a DDoS attack, perpetrators use the entire network infected devices, such as botnets, as the source of attacks. The distributed network makes it nearly impossible to identify the source of the attack or to block it. Devices within the Internet of Things (IoT) are most suited for this purpose as the number of these devices is constantly growing, yet the security remains, in large inadequate.

The three most common methods of DDoS attacks include –

How Do DDoS Attackers Use Spam Emails?

In DDoS, multiple machines work together to attack one target. To execute an attack, hackers use phishing emails to install the malware in remote devices that becomes part of the DDoS botnet. The scary part is, your PC may be a part of a botnet without you even knowing it.

The attackers often send spam emails, including personalized messages, to manipulate recipients to download an attachment or click on a link. Any interactions with spam emails can install malware to your devices that will later be used in DDoS attacks. DDoS botnets include PCs, servers, mobile phones, and IoT devices infected and controlled by malware. The devices used in the DDoS attacks, also known as “zombie computers”, can range from thousands to millions in number within a botnet. The more widespread the botnet is, the higher is the rate of attack.

Another way attackers use spam emails is to send you a personalized email promising to commit a DDoS attack on your website. In most cases, the attackers will demand a one-time payment in Bitcoins, an untraceable form of cryptocurrency, within a certain amount of time. Even though it is similar to ransom attacks, instead of delivering a malicious payload, they bank on the fact that a certain percentage of their target will take their threat seriously enough to pay the ransom.

How to Know If Your Computer is Part of DDoS Attack

More often than not, the user of the devices used as a part of a DDoS attack remains unknown of the fact that they are a part of the botnet. Here are five signs that your computer is a part of a botnet –

How to Protect Your Email from DDoS Threats

As previously mentioned, attackers use spam emails to take control of your devices to add them to their botnet or threaten you to commit a possible DDoS attack on your website. Either way, protecting your email address on the internet is the first step to defending yourself from such threats.