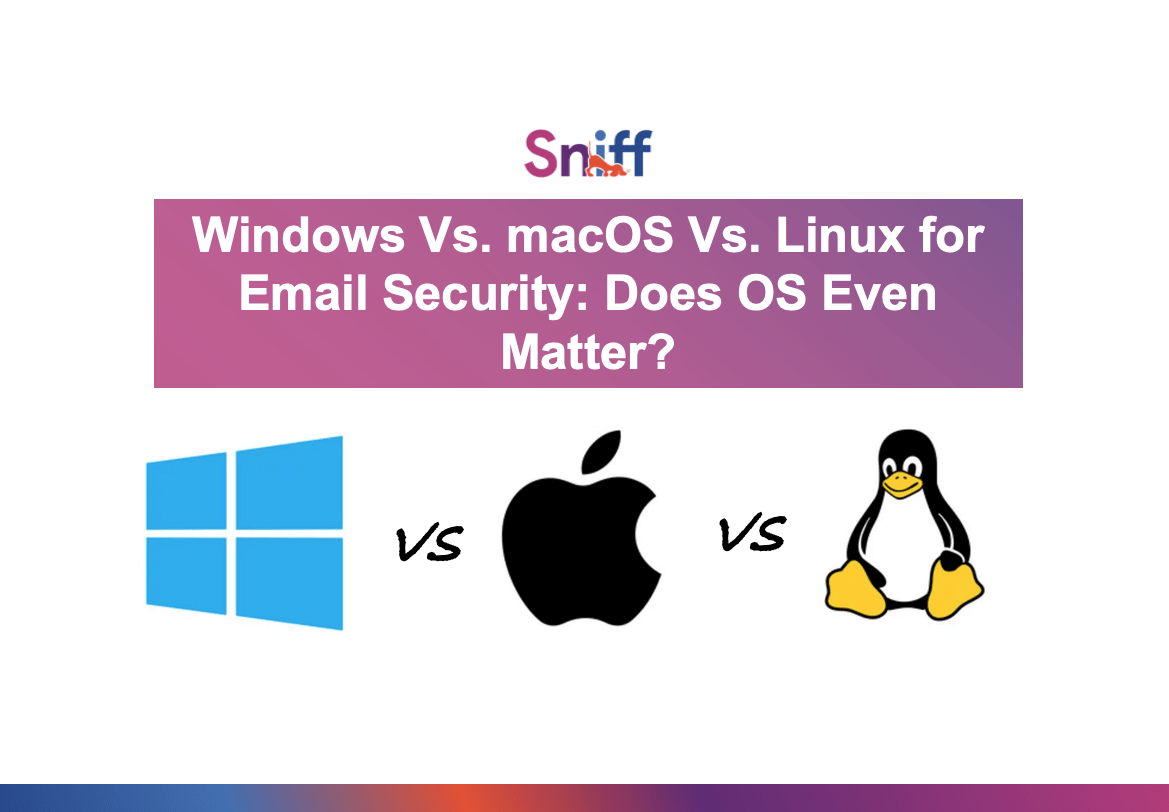 Windows Vs. macOS Vs. Linux for Email Security: Does OS Even Matter?

Email security is a part of cybersecurity that includes procedures and tactics for protecting the email account and the content of each email. Hackers can use email accounts as a gateway to breach larger connected networks. So, you need to think about all the potential vulnerabilities to protect yourself from threats.

So, what is the best OS for email security? Is one better than the other? Or does it even make a difference? Let’s find out.

What is the Best OS for Email Security?

Even though Windows has a bad reputation for security, the real reason for it is not lack of security standards or innovative measures. The real reason is that Windows is the most used OS globally, taking over an average of 75% of the market in 2021 — making them a bigger target for attackers. The majority of new malware is designed for Windows, considering the higher chance of success just based on the number of users. Larger attack surfaces and predominant use in enterprises make them a preferred yet difficult to penetrable target.

Windows is equally or sometimes more secure than other operating systems from a technical point of view. Microsoft rolls out regular updates on their OS to patch up any remaining vulnerability and protect against the latest attacks. Windows comes with Anti-malware software and sandbox by default as part of their security engineering framework to detect and safeguard PC from threats.

macOS has built up a reputation for being a secure OS by default. But it is primarily due to the fact that it does not offer ready-made network services, which may introduce vulnerabilities. Newer Mac models include the Apple T2 Security Chip that introduced Touch ID, secure boot, FileVault, and encrypted storage capabilities — making macOS more secured than ever. It also deploys a default tactic of blocking the open-source and free software from loading.

macOS faces fewer viruses than Windows, not because it is completely secure and free of vulnerabilities, but simply because it’s targeted less by attackers. Since the number of PC users far exceeds those of Macintosh or Linux, attackers target Microsoft Windows more than the two. However, the user trend is changing, with Mac OS X occupying a market share of about 10%. With the increasing number of user, the Apple operating system is now being targeted more and more.

Linux is an open-source operating system that is most popular for servers. Linux has the upper hand when it comes to security as the open-source community continuously looks for every security vulnerability and issues a security patch for it. However, one might argue the many eyes security theory is patently flawed. But the simple idea of more people reviewing and patching a code versus a limited group of people looking for vulnerabilities certainly makes open-source systems more secure.

The advanced sandbox options in Linux are one of the main reasons some tech experts claim Linux to be more secure than its competitors. It also implements various security aspects that complement each other to secure the system. Linux recognizes that permissions solve 99% of the issues in cybersecurity, making anti-malware and firewalls almost redundant. The Red Hat Enterprise Linux has gained popularity among enterprises, which is strengthened explicitly for data security.

Windows Vs. macOS Vs. Linux

So, who won the security test for emails?

The answer is all of them.

Neither of the three most popular operating systems has any inherent security vulnerability. However, dominating three-quarters of the market, Windows is most prone to attacks — posing email security threats. The limited number of users of macOS does give them an advantage, but that can all change if attackers target them more often. Linux, having the potential to be the most secure, combined with best user practices, might be the safest OS. However, it is definitely not for everyone.

Does the OS Really Matter for Email Security?

The OS you use is definitely a factor in email security but barely even the primary one. As it turns out, a breach is more likely to occur because an attacker probed your users, not your systems. A survey run among hackers revealed that “84 percent use social engineering as part of their attack strategy.” Deploying a secure OS is an important starting point, but even the most secure OS can be invaded without safe practice and user education. Being nearly equally secured, it really doesn’t matter which operating system you choose from Windows, macOS, and Linux regarding email security.